At the May TC39 meeting I presented [pdf] an overview of Notification Proxies, as a possible alternative to Direct Proxies. This post briefly summarizes my talk, and the feedback I got from the committee. tl;dr: notification proxies are off the table, we’re sticking to direct proxies in ES6.

And here is the same example, implemented using notification proxies:

The onGet method is called when a property access is intercepted on the proxy, e.g. proxy.x. I renamed the get trap to onGet to make it clear that the trap is now a simple callback that doesn’t compute and return a result. Second, the onGet trap no longer manually forwards the operation and manually returns the result. The forwarding happens automatically. The onGet trap does get to return a function that will act as a “post-trap”: a hook that will be called after the operation was forwarded to the target. This “post-trap” accepts the same arguments as the onGet “pre-trap” except that it additionally takes the outcome of the operation. In the above example, when intercepting proxy.x, result will be whatever value was returned from target.x. The post-trap can inspect the result (and if the result is a mutable object, it could still mutate it), but it cannot change the outcome of the intercepted operation anymore. That is to say, proxy.x will return result regardless of what the post-trap does.

Because the notification proxy always returns values that were retrieved directly from the target object, rather than provided by the handler trap (as in the case for direct proxies), the notification proxy doesn’t need to verify whether the handler’s return value is consistent with the target object’s invariants. For example, if target is frozen, then target.x is a non-configurable, non-writable property. In that case, proxy.x must consistently return the same value that target.x denotes. With notification proxies, this is trivially enforced without any explicit assertions.

To further compare notification proxies with direct proxies, I implemented the membrane abstraction using both. The goal of a membrane is to isolate two object graphs. Membranes serve as a “litmus test” for the expressiveness of a Proxy API, as they are quite tricky to implement: the membrane must keep the wrapped object graphs isomorphic, and must maintain invariants across the membrane, i.e. a frozen object inside the membrane must be represented as a frozen proxy object outside of the membrane.

Implementing membranes with direct proxies is relatively straightforward as long as you don’t care about invariants (i.e. frozen objects). This is the “try 1” approach from the slides. The basic idea is that a membrane proxy, in each of its intercepted operations, forwards the operation to its target object on the other side of the membrane by wrapping all non-primitive arguments to the operation and unwrapping the result. Note that in the slides, I use the convention of prefixing variables with a “wet” or “dry” prefix to describe whether they refer to values inside or outside of the membrane.

The straightforward membrane implementation of membranes with direct proxies breaks down when the direct proxy wraps a frozen object. In that case, the direct proxy invariant checks will prevent the proxy from returning wrappers for frozen properties, to guarantee immutability. To make matters more concrete, consider the following setup: 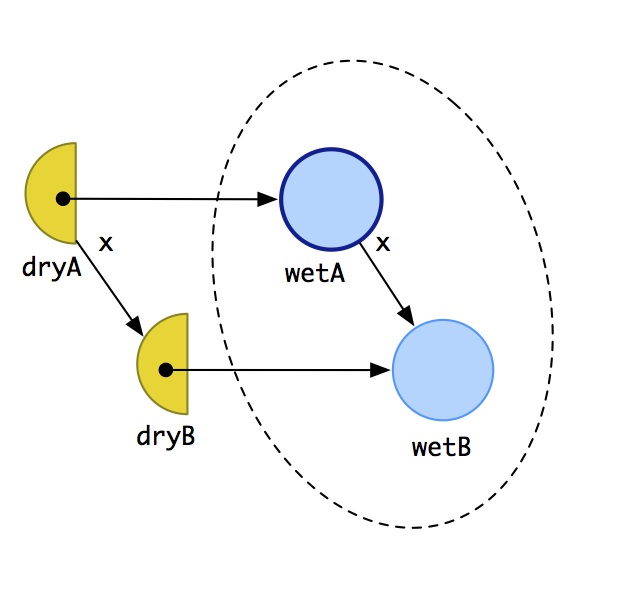 However, when executing the above code, a problem occurs when accessing dryA.x:

What is going on here? Because wetA is frozen, wetA.x is a so-called “non-configurable non-writable” property. This means that wetA.x will forever refer to the wetB object. The dryA direct proxy for wetA will not allow the proxy to return any other object than wetB from its get trap for the “x” property. However, the membrane returns a wrapper (a proxy) for wetB, which causes the assertion inside the proxy to fail, resulting in the above TypeError.

Applying the shadow target technique to membranes, the key idea (due to Mark S. Miller) is to have the shadow and the real target sit on opposite sides of the membrane. For instance, for a dry-to-wet proxy, the “real target” is “wet” (i.e. inside the membrane), while the “shadow target” is dry (i.e. outside the membrane). Whenever the dry-to-wet membrane proxy intercepts an operation, it retrieves the wet target’s property and wraps it, defining a dry equivalent property on the shadow. Afterwards, it just forwards the intercepted operation to the dry shadow, which will at that point be correctly initialized. 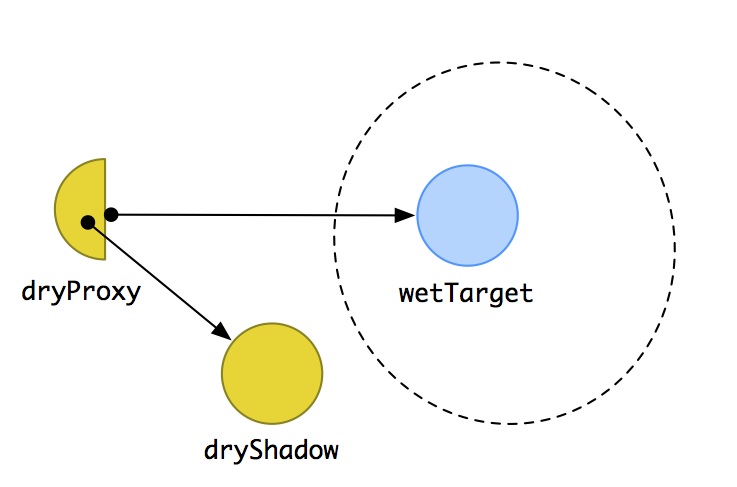 One “optimization” that membranes implemented using direct proxies can perform is to test whether the target object is frozen and if not, use the simple “try 1” approach of forwarding the operation to the target directly. If the target is frozen, the membrane can fall back on using the shadow target to define the wrapped property. In other words: as long as the target object is not actually frozen, the membrane does not need to copy properties onto the shadow target.

In order to get some indication of the relative performance difference between direct and notification proxies, I ran some micro-benchmarks.

The basic setup is that we create a large data structure (a large array, and a large binary tree), which then gets wrapped in a membrane. The micro-benchmark then measures the time taken to traverse this large data structure from outside of the membrane. This requires each individual array element or tree node to cross the membrane. I ran these micro-benchmarks both for the case where the data structure is frozen (i.e. has strong invariants) vs. non-frozen (i.e. has no invariants). This matters because of the previously described “optimization” that direct proxies can do when they’re wrapping non-frozen objects.

I ran the benchmarks in the two browsers that currently provide support for proxies and weak maps: Firefox and Chrome. I believe this comparison between direct and notification proxies is apples-to-apples in that both are self-hosted implementations in JavaScript. Note that I am only looking at relative perf. I’m not interested in absolute numbers because my reflect.js shim is adding too much noise. Built-in proxy implementations will be orders-of-magnitude faster. Similarly I’m not interested in the difference in timing between Firefox and Chrome, or between frozen and non-frozen objects. I’m only interested in the relative perf difference from running the same traversal, in the same browser, with direct vs notification proxies.

As the results in the slide deck show, the results are very inconclusive. From these results one cannot say whether one API is faster than the other. My gut feeling is that either API can probably be made efficient. The key point is that notification proxies must always use the shadow target technique when they’re implementing “virtual object” wrappers such as membranes.

Eventually, TC39 decided to stick with direct proxies, for two (good) reasons. The first is that notification proxies, while they are simpler and easier to specify, put more burden on Proxy users because they require Proxy users to use the (admittedly complex) “shadow target” technique for all virtual object use cases. In other words, they make life easier for the spec but not necessarily for the developer. That’s optimizing for the wrong audience.

Notification proxies were also motivated by a fear that the invariant checks for direct proxies are hard to get right, and easy to overlook, thus allowing attackers to create proxy objects that deliberately violate JavaScript’s invariants to confuse other scripts. Such bugs in the specification have come up before. The counter-argument that was made is that such spec loopholes can be closed, and implementations can issue patches swiftly when security is at stake.

All in all, I think Notification Proxies provide an attractive, simpler alternative to Direct Proxies given JavaScript’s fairly complex object model. That said, the need to use the “shadow target” technique to express certain abstractions such as membranes or higher-order contracts, even for non-frozen objects, is pretty tedious. With three proxy designs now worked out in detail (original proxies, direct proxies and notification proxies) we have a solid overview of the design space. Language design always entails trade-offs, so every API will always have use cases that it supports better than the others. Overall though, I’m happy to settle on the direct proxies API.